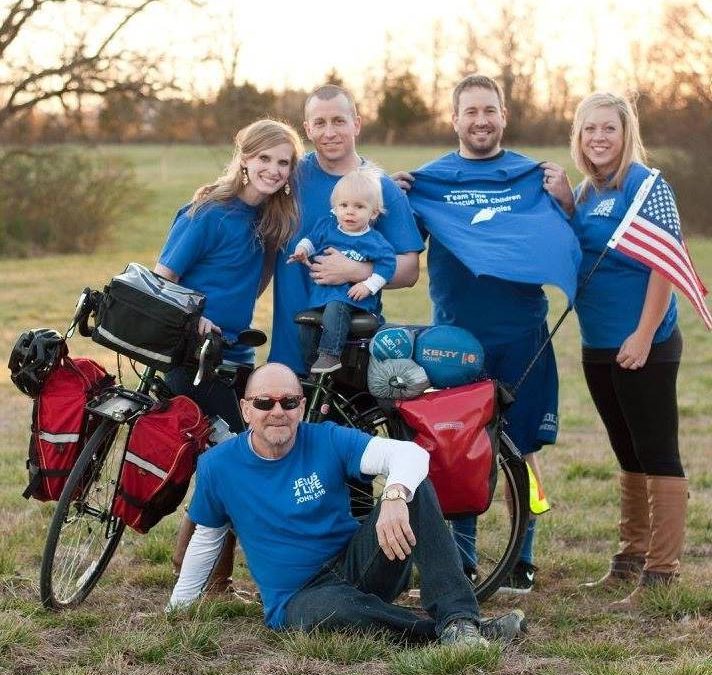 Mike Washington looks like an endurance athlete. He’s tan, lean, vibrant, but also incredibly humble despite his accomplishment: biking across the United States in memory of his wife. Yesterday, I had the opportunity to sit down with Mike and hear what motivated him to complete such an endeavor.

Mike’s story began last year, when he decided to bike from Springhill, TN to Newnan, GA in memory of his wife, Tina, a woman who loved children, God, and passionately supported pregnancy centers in the Middle Tennessee area. His voice softens when he speaks of her. The couple married just after Tina graduated high school (she was 17, he was 19), and the two were together for 41 years.

Amazingly, the trip only took him five days instead of seven, and he arrived in Newnan on the one year anniversary of Tina’s passing, meanwhile raising $700 for pregnancy centers in Springhill and Columbia, TN. He’d never been the adventurous type, but he notes that “almost immediately after, the Lord put it in my heart to do something on a larger scale.” So, he started planning a longer, cross-country trip. On March 26th, 2016 he flew to San Diego, CA with his bike and supplies. March 28th, the day after Easter, he set out on his adventure. Averaging 72 miles per day (his longest being 122 miles), it took Mike a mere 40 days and 2,966 miles to reach St. Augustine, FL.

Every Sunday during the trip, he would rest and attend the nearest church in the area, sharing his journey and goal with the members. People embraced what he was doing in support of babies, families, and his wife, and Mike received many donations and Facebook followers along the way. Even complete strangers would donate to him after seeing the “Biking for Babies” sign on his bike and hearing about his cause. He vividly remembers when in the middle of downtown Austin, TX, a couple prayed for him and handed him $100 cash. In total, he collected $400 cash along the way as well as $3,500 on his Go Fund Me page, and he’s hoping to reach $10,000. A portion of his proceeds will be donated to Hope Clinic.

I wondered what the most difficult aspect of the trip was. After all, I’m only twenty years old and I can’t fathom biking such a distance. But the physical trials proved easy for Mike. “The mental part – the mental and the spiritual part was the hard part. Trying to do something like riding a bicycle in between seven to twelve hours a day, that many days, and being away from family and friends, and just not seeing anybody that you know, day in and day out, that was the hardest part.”

The variations in landscape, along with unpredictable weather, also proved trying at times. He woke up one morning in Pine Valley, CA and it was 35 degrees. The hills he faced sometimes took an hour and a half to climb. He had eleven flat tires in his third week. And just the second day of his journey, his phone fell out of his pocket and smashed to the ground, but “the Lord took care of that too.” A woman in town took him to the nearest Walmart – about 25 miles away – to get a new cell phone. However, despite these difficulties, Washington notes that “God’s grace is always sufficient. And the people I met, and experiencing the Lord every day of the trip, was just indescribable. I know that the Lord would speak through people and talk to people, and they would encourage me, and I knew that that was the Lord speaking through people.”

The highlight of his journey, he said, was during his final week on the road. Washington had just crossed into the Florida panhandle, posting his progress on Facebook. Little did he know that his oldest son, daughter-in-law, and one-year-old grandson were vacationing in Gulf Beach, FL, and saw his post. He received a text from his daughter-in-law asking where he was, and they took him by surprise when they managed to find the exact Burger King he was resting at. It seemed as though God stepped in, bringing Mike a little extra motivation during the last leg of his journey.

In each of the coming years, Mike plans on doing something significant in his wife’s memory. But for right now, I hope he rests up for whatever adventure God takes him on next.